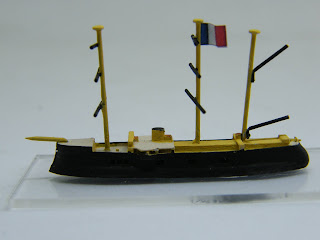 Since I haven’t developed the last batch of photographs from Mars for the latest installments of “Rough Riders on Mars” and this blog is supposed to be about what I am doing in the world of wargaming; I have decided to post some photos of the Ironclad warships I’ve been making.

As it happened, I was browsing on the internet and came across an article on ‘Jeune Ecole’. This was a French theory of using many small torpedo craft, coastal defense ships, and commerce raiders to defeat a more powerful (British) navy. The idea was at its heyday in the 1870’s and 80’s and it greatly affected French naval policy.

I found the idea intriguing, but knew the torpedoes of 1870 weren’t the weapon that would make ‘Jeune Ecole’ possible. Somewhere around the mid to late 1880’s torpedoes had a range of around 650 yards at a speed of 24 kts. At a game scale of 1/2400, this is about 10”, or about 1/3 of what the French (and most everyone else) considered effective long range for gunnery.

This would give a flotilla of torpedo boats a chance to close to torpedo range in one to two turns under fire (in the best case scenario). With a large number of torpedo boats and the distraction of coastal defense and capital ships nearby, this seems to be the period where ‘Jeune Ecole’ might first be possible.

At the same time, I ran across a free PDF version of “Brassey’s Naval Annual – 1887 edition”. This book has all sorts of information about ships, guns, and other naval related items, mostly for the British navy, but it also has much information about other navies. The part of the book that really caught my interest were the line drawings (deck plans and elevations) of the ships then in service. Using these drawings, as well as “Conway’s All The World’s Fight Ships 1860-1905” and other sources I have, I figured I could make 3D digital models of these vessels and print them on my 3D printer.

To that end, I present to you the following photographs of my work:

These are some, but not all of what I’ve made so far. Here are some close-ups of some of the ships pictured above. 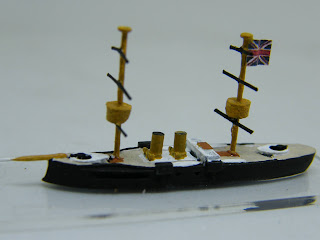 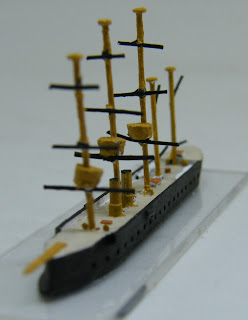 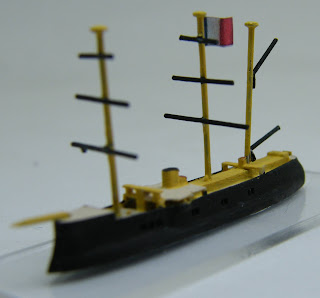 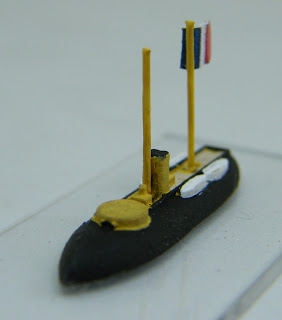 Cerbere
Please note, the clear bases were made by LITKO Game Accessories. I think they will really help protect the models and make them easier to move on the gaming surface.
I will have more photos to share and will have even more as I complete more models.
Now I must get back to developing those pictures from Mars.
Posted by Chris at 6:37 PM 4 comments: