Rough Riders On Mars! - Chapter 34 – The Road To Lethes

Chapter 34 – The Road To Lethes

We walked back to camp, both deep in thought. We returned just in time for the evening meal. After dinner, I made arrangements for posting sentries. I set up two, two-man teams for each four hour stint. One Martian and one Earthman in each team. By this time, the Scouts were picking up a good bit of English and the isolation of sentry duty would help this along even more. 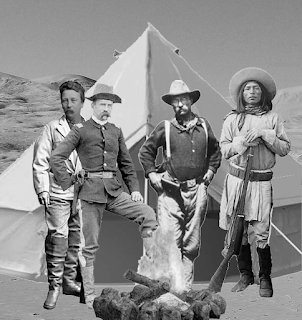 After the evening’s duties were completed, I called Sergeants Fish and Banto to my tent. I meant to
discuss the news we obtained and see how it would set with the men.

“Good evening gentlemen,” I started, “I hope you both are well.”, to which they both answered in the affirmative.

“How do you feel the men did on our march today?” I asked.

“Not bad, for a bunch of greenhorns.” Sergeant Fish said.

Sergeant Banto said, “I thought the Scouts did well for their first march.”

“As did I.”, Sergeant Fish replied, “I was referring to the greenhorns in my squad.”

To this exchange Sergeant Fish and I gave a hearty chuckle. Sergeant Banto eventually understood Fish’s comment to be a joke and joined in the mirth.

“I suppose you might be interested in the news we obtained from Corax.”, I began. “Well, it is not all good, but not all bad. Nothing is confirmed yet, but it appears that the situation could turn ill in short order. So, I would like your estimation of our men before we proceed.”

“The town of Corax is friendly toward us and the Democracy movement, so we are safe tonight.” I began. “However, the next village, Jamuna, is not. In Lethes, we have friends, but they are repressed as were our friends in Ceraunius. It will be worse in that respect the further east we go.  So, what I need to know is, how jumpy are the men? I ask because even though we are going to avoid hostile areas, we may still encounter unfriendly people and I do not want to provoke an incident because of nervous jitters.”

“Bully! Gentlemen.”, I said. “Tomorrow we will be skirting Jamuna and camping on the margins. Sergeant Banto, I expect your men to instruct Fish’s squad on the dangers of the wilderness as we go.”

“It will be done.”, Sergeant Banto replied.

“We will get an early start tomorrow, so I’ll bid you good night.”, I said.

With that the Sergeants retired. I checked on the sentries then retired as well. We broke camp as the sun came up and were on the road within the hour. We marched through Corax with the admiration of the locals. After 5 miles we stopped for a break. As we relaxed on the edge of the canal, I spotted a boat coming up from the east.

The ship slowed to a stop a good distance away, stayed there for a bit, then turned and sailed away.

“Sergeants,”, I said, “I think it is time we started a cross country march. Travelling the road is too easy. Sergeant Banto, take the lead.”

We marched south for a couple of miles then went back to the southeast. I allowed the squads to mingle so that the scouts could point out items of interest as we passed them. I did, however, maintain vigilance as the boat we spotted I believed to be reconnaissance from Reytik’s forces. I still did not expect to meet his men, but the fact that he was checking on us gave me pause. 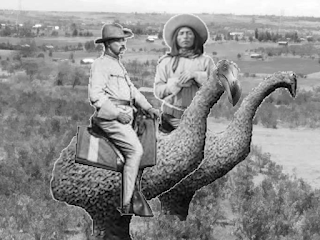 By late afternoon we were passing Jamuna, though it was well out of sight. We found a spot to pitch camp. While the men set up camp, Sergeant Banto and I scouted toward town. We rode to a small rise that overlooked the town. As we surveyed the area, I spotted a man moving through the field below us.

“Sergeant Banto,” I whispered, “that man there, does he look like a farmer, a soldier, or some other sort of fellow?”

“He appears to be a farmer.”, Banto said, “but he is not farming. He is looking for something.”

“Could you bring him here without causing him undo distress?”, I asked.

“I think that is possible.”, he said.

With that Sergeant Banto circled around and approached the man from the direction of the town. He stopped near the fellow and they talked for a bit, then Banto pointed my way. The two men then started toward me. When they arrived at my location Banto introduced our friend.

“This is Gorlak.”, he said. “He is missing a small one, a child. The Headman here was no help, so he must search on his own.”

“How long has the child been missing?”, I asked.

“Tell our friend here that we will help him find his child.”, I said. “I’ll get the scouts. They won’t arouse so much suspicion if they are spotted.”

Sergeant Banto relayed my offer to help and Gorlak appeared grateful. He and Banto began the search and I went to retrieve the scouts. When I returned, I had the scouts scour the fields in pairs. I was with a private, Nanto. We were searching along an irrigation trench when we nearly tumbled into a sinkhole. Our stumbling around the edge of the hole aroused a reaction at the bottom. We peered over the edge to see a young lad, severely injured. 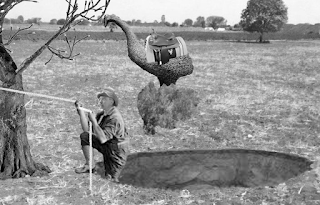 I fetched a rope from my mount and ordered Nanto to get help. I then tied the rope to a nearby tree and
descended into the hole. The bottom felt spongy under foot and I didn’t know how long it would hold. I tied the rope about my waist then took up the boy into my arms. I felt the floor slowly sinking when Nanto and several others arrived. The men pulled us out of the hole as the bottom collapsed into a subterranean watercourse.

Immediately upon our extradition, we gave the boy some water and first aid. The lad responded favorably as his father arrived. Gorlak was overwhelmed with emotion. He asked why Ceraunian soldiers would bother helping a poor farmer.

I asked, “You have heard that there is a new government in Ceraunius?”. To which he acknowledged he had. “We are part of the new regime. As we get stronger, you will find this government more to your liking.”

Gorlak thanked us and told us to be wary as we headed east. He has seen many soldiers heading to the mountains. With that I had Banto and Nanto help carry the boy back to his house while I took the rest of the men back to camp. The next day we marched to Lethes.