Back in the days, before smart phones, cell phones, the internet, usable home computers (1985); when one had to go to the local game store to find out what was new; Koenig Krieg 2nd edition was published and Minifig released 7 Years War Army packs. 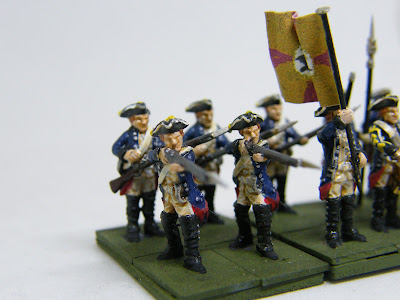 With these two releases, I fell in love with the period. I built large Prussian, French, and British armies
from the Minifigs and Koenig Krieg was a wonderful little game.

As time went on, I traded my armies for a mass of Zulus so I could refight Isandlwana in 1/10 figure scale. And while the 2,000 Zulus made for a breathtaking spectacle, still, it didn't match the beauty of the Lace Wars.

Move ahead 35 years and the Armies of Frederick II have come calling again. While scanning through the 3D model search engine, I found a very talented artist, Felipe Manivel. He has designed 3D printable models for all of the powers involved in the 7 Years War. 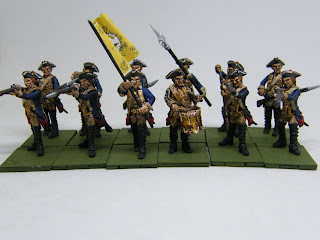 These models are scaled for 28mm and come as bodies with separate arms and heads. And not just one pose. I can make my infantry firing, reloading, kneeling, marching, or charging. For the Prussians, I can make musketeers, fusiliers, grenadiers, dragoons, cuirassiers, and artillery. Each with multiple bodies, heads, and arms.

Now, I still have an old Austrian Minifig army in my possession, so I would like to be able to use it. Scaling down these wonderful models is not a problem in the computer age, but trying to glue together 15mm figures could be. However, Microsoft has a free program called 3D Builder. With this I can assemble a model and then scale it to 15mm and print it out as a full figure.

So, I've spent several hours virtually assembling my soldiers, then printing and painting. And here are the results. And if you are curious, a unit of foot costs less than a quarter to print (not accounting for the cost of the printer, which I bought for other purposes anyway). 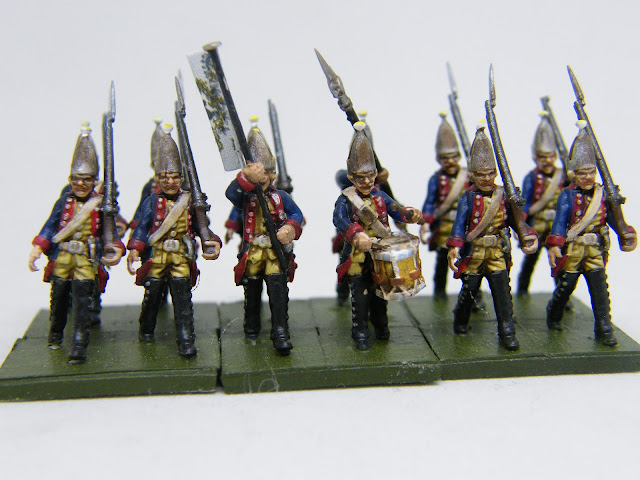 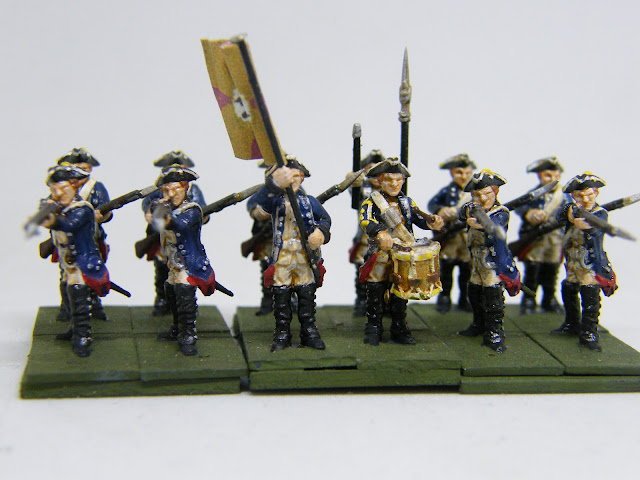 15mm Musketeers. Note the Standard Bearer was originally made with a flag. I replaced it with a straight pin so I could use printed (on paper) flags. 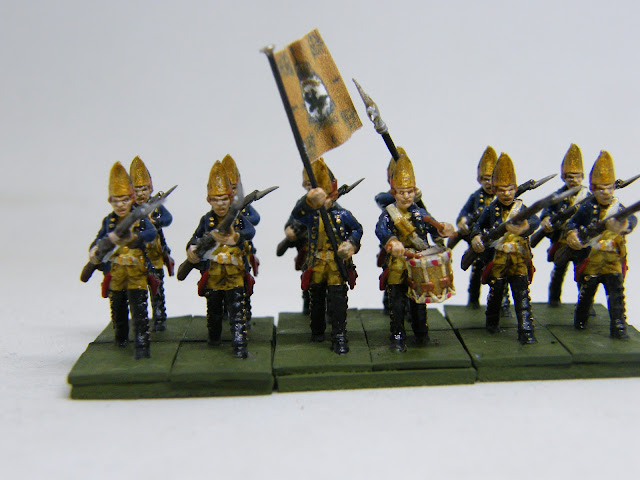 15mm Fusiliers. The mitres are a bit too tall. I may fix this when I get to the 28mm versions. 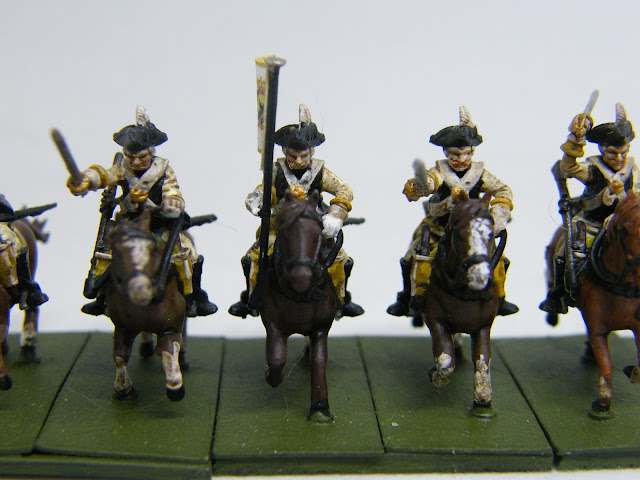 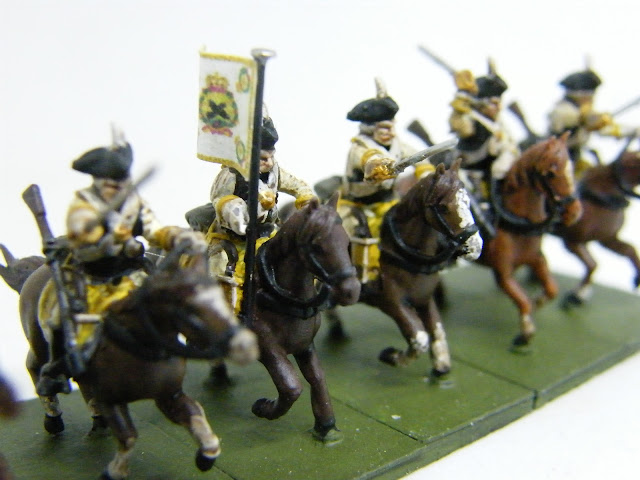 15mm Cuirassiers. Unfortunately, there are not guidon bearers in the original models. I just clipped a sword off a trooper and glued on a straight pin flagstaff. 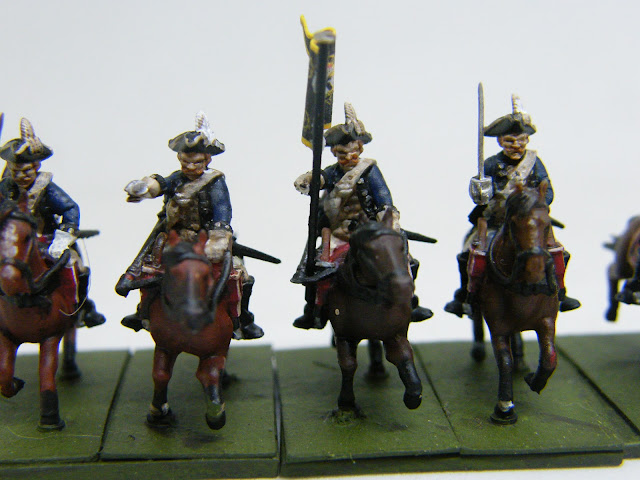 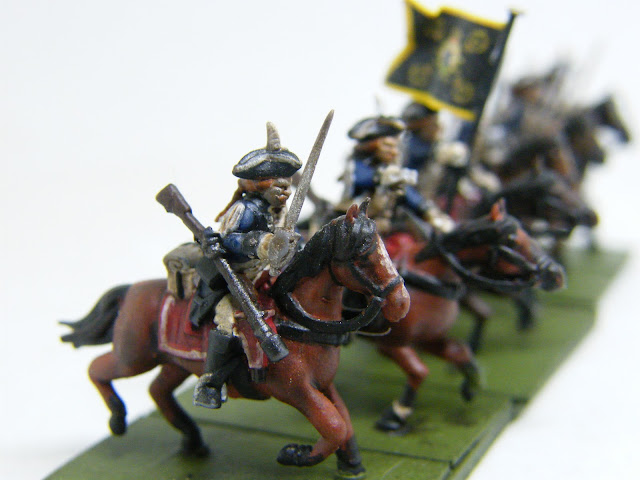 15mm Dragoons. I had to make the guidon bearer here too. 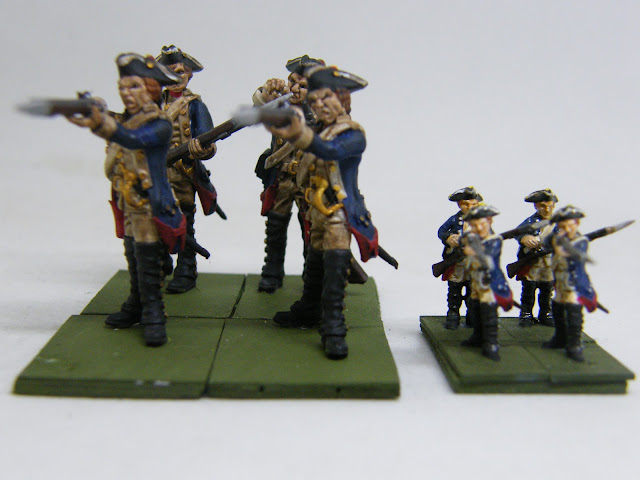 This is a comparison of the 28mm version and the 15mm version of the figures. 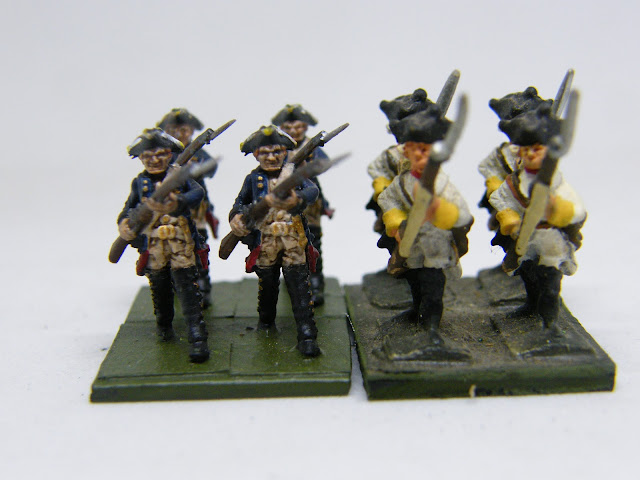 Here is a comparison of the 3D printed Prussians and the Minifig Austrians. I probably should have scaled up the Prussians, but I can live with the difference. If they were any larger, the cavalry would not fit on the Koenig Krieg sized bases.